With the constantly rising popularity of IoT and Edge computing, the ARM architecture is gaining a lot of appreciation. Not only phones are now equipped with ARM processors but also small single-board computers. The most popular example is, of course, the beloved and super popular Raspberry Pi, however, there are a lot more devices designed with makers in mind, like the NVIDIA Jetson family, Khadas VIM, and Rock Pi to name a few. Because of that, the need to build, test and run code both natively and in Docker containers on various architectures is bigger than ever.

Why should I bother?

In this article I want to show how to build and store our images for different architectures so that they behave similar to the python image which you can run on almost any architecture just by running docker run -it python:3.8. The main focus is on how registry handles multiple images and how the images work. I won’t use the built-in Docker buildx command as it has some restrictions and it will be harder to explain what is happening under the hood.

If you want to follow along I have prepared a repository with source code, all the commands, Dockerfiles, and everything you need to do to run similar tests. You can work on your hardware as long as you can run Docker on it and the architecture is supported by Python, which you can check in the picture below. The repository can be found here

Let’s start by checking what can we find about the python image with 3.8 tag on the docker hub.

As you can clearly see this image with this given tag is available for multiple architectures. Thanks to that I can run a simple python script on all of my test hardware. My laptop:

This portability is pretty awesome — we can develop python scripts that can run on a multitude of devices without a huge hassle. And what is more important, we do not have to worry about remembering which tag runs where. This is critical if we want to develop an application that will be run by external users; no one will be interested in digging through documentation to understand which tag they should choose based on their hardware. However, there is a catch as to how to make our images work the same way.

I want to start by illustrating where the “catch” is so I can later show how we can correctly solve the problem.

First of all, we need a test subject. Time to build and test simple API that will return a hostname and equivalent of uname -i

And let’s see how it looks on the Docker Hub.

Cool! We have the image, and as you can see in my case it is linux/amd64 and it makes kind of sense as if you remember the output of uname -a on my machine was

and we need to remember that often x86_64 and AMD64 are used to represent this architecture.

The quote “The nice thing about standards is that you have so many to choose from” from, I think, Andrew S. Tanenbaum fits here pretty nicely.

Now I can run the application

and in the second terminal check if the app is working

OK, it seems everything is going according to plan.

As we know Python is very portable, and we should be able to run our simple script on a multitude of architectures. Well, Python is, but our image isn’t. Remember when we looked at the Docker registry? When I’m running the same command I get this nasty error.

To understand better what happened we need to think about how docker builds the images. Simplifying, it takes the list of layers that are composing the base image — the FROM python:3.8 from our example - and running commands from Dockerfile on top of them. Every command is a new layer and then, it creates a new image manifest with the list of layers.

You can always review the layers on the Docker Hub UI. The Python image looks like this 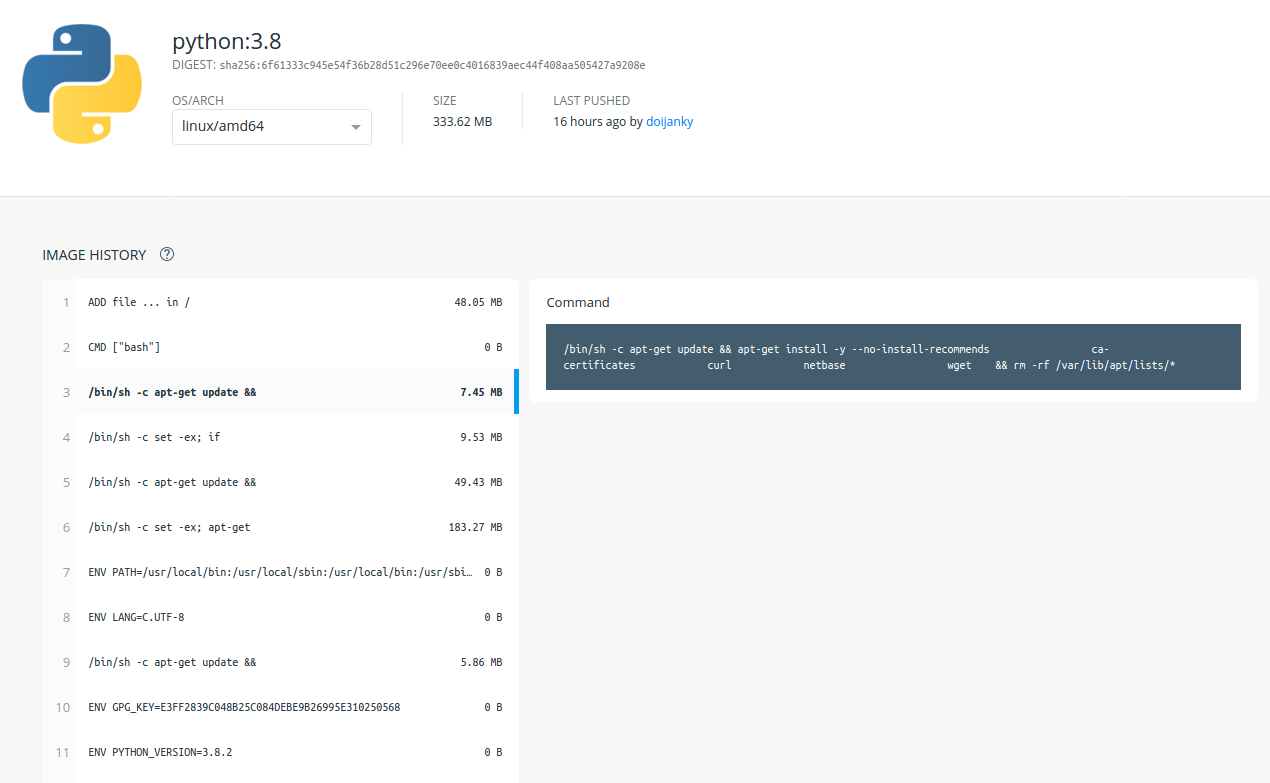 From here you can learn how each image is built. As you can also see, there is an architecture dropdown and images for different architectures may be built differently. And that is why when we built our image, it took as a base a very specific image. This image was designed for AMD64 architecture and will not work on hardware that is not compatible with this architecture. And what we want to do, is to have our image behave the same way — have a dropdown and be available on a multitude of platforms.

Building on a different architecture

It is time to build the same application on my Jetson Nano and push it to the registry.

Running the build on Jetson Nano will create an image that is based on ARM64 Python image, and will have the same architecture in its manifest.

I have run the same test with the curl command on my Jetson Nano and it works perfectly. Let's look at the Docker hub and see how the images are described now.

As you can see docker has overwritten the fixedarch tag and now the only available image is on ARM64. When I try to run it on my laptop which is AMD64 architecture or Raspberry Pi which is on ARM32 I will get familiar errors. So, we can build images for different architectures, but how to expose them under one tag?

Manifest tool to the rescue

There is a tool designed to resolve this problem written by Phil Estes. You can read more about it, and download it from here What we need to do now is to build all 3 images with different tags and then use this tool to create a multi-architecture manifest and publish it on docker hub.

The easiest way to do it is to push all 3 images with different tags and then merge them into the same tag. I choose to use multiarch as a tag and add -arch suffix for every architecture that I will build the image.

Run the docker build on my laptop

and then docker push

I have repeated the process for Jetson Nano and Raspberry Pi 4, and now we can verify images at the docker registry.

Now we need to create a spec file in YAML format that we will pass to manifest-tool, to create a multi-architecture manifest gluing all images into one tag.

Notice, that the architecture for ARM32 bit is actually arm. The values in the manifest need to correspond to the values found in the docker registry.

And now for the final step!

So now we know how to build images that users can use seamlessly on multiple architectures. Now, this small app can run on all 3 devices and there is no need to worry about which tag to use — simply use the multiarch tag!

There is a lot more to preparing applications to run on every platform. In this example, we used Python which by itself is portable. Most of the Python code can run anywhere without needing to port anything, and usually, the only thing that users have to worry about is having Python interpreter available. Applications in other languages — especially the compiled ones — need to be written with portability in mind — and built on a given machine. Sometimes — like with Golang for example — the compiler offers cross-compilation. Building applications on multiple architectures is an actually massive subject, and I will try to cover more aspects of it, including how Docker can be used to help with this process in future articles.

IoT and Edge are pretty hot topics, so it's no wonder that many applications run on both ARM and x86 architectures. While dockerizing multiplatform applications it's a good idea to prepare multiplatform-aware images as well, as it can simplify a lot of things down the line and implementing this shouldn't introduce too much overhead. Jakub has prepared a write-up on building a multi-architecture image for a PC, NVIDIA Jetson Nano and a Raspberry Pi, you can check it out on our blog.